I’ve been thinking lately about the popular concept of “people-pleasing” and how it relates to my lifelong function as an entertainer and a songwriter.   It seems to me that. as a musician and composer, I am naturally concerned with reaching the largest possible audience.  I measure the success of my compositions and performances based on how widely they are acclaimed.  This is only natural, and in this respect I don’t differ widely from any other Artist.

However, there is something amiss in this standard.  Although there are many who differ with my view, I am one who holds that there is an absolutely objective standard whereby all Art may be judged.  The success of an artistic enterprise is not merely a matter of personal taste.  There is a God up in heaven whose artistry is superior to that of any human Artist.  Whether we are concerned with the Performing Arts as I am, or with Fine Art as others are, or any other form of creative endeavor; surely His assessment as to the quality of Art is perfect and divine.  People may argue till kingdom come as to whether it was Leonardo, van Gogh, or Picasso who produced the finest Art; but were God to intervene and state his most righteous piece on the matter, no one on earth would dare to contest it.

While I may have put much thought into the matter, all the thinking in the world cannot come close to approaching God’s thoughts on the subject.  While I may attempt day by day to hone my craft to impeccability, none of my efforts could ever be on a par with the God’s most effortless perfection.  Could I have orchestrated the music of bluebird, hummingbird, or even mocking bird?  Could I have sculpted the Pinnacles, or Mount Everest, or even Vesuvius upon eruption?  Or have painted the many masterful sunsets we all have beheld in awe?  Certainly not.  No mortal could come near to the manifestation of such marvels.

So, while this is the standard to which I aspire, how is it that I would still be concerned with pleasing the multitudes?  Especially when one considers how much disagreement there is among them?   I believe the words of St. Paul impart, in part, the answer:

For though I am free from all, I have made myself a servant to all, that I might win more of them.  – 1 Cornithians 9:19

Paul was of course referring, not to personal artistic triumph, but to the far more important matter of eternal salvation from judgment.  But there is an analogy here, also aptly illustrated in the words of Jesus:

Whoever wants to be first must be least of all and the servant of all.  – Mark 9:35

It frees me from stubborn adherence to an unapproachable standard to consider my artistry as something like a public service.  If someone for example says that a certain passage sounds “harsh,” I can serve them by making the passage softer, without in any way affecting the rest of the piece.  If another person says the passage is too weak, I can strengthen it.  While it is true that not everyone will be pleased, I can at least consider that each criticism reflects an aspect of a common standard, and in taking in them all, I stand a better chance of serving the multitudes, rather than of forcing my own impossible standard upon them.

To the weak I became weak, to win the weak. I have become all things to all people so that by all possible means I might save some. – 1 Corinthians 9:22

To the modern mind, this might seem like the ultimate in personal compromise.  However, there is a liberation here on a spiritual level that is able to inform my Art.  Rather than contend with a God whose standard is unattainable, I will consider that in serving others, I am serving God. 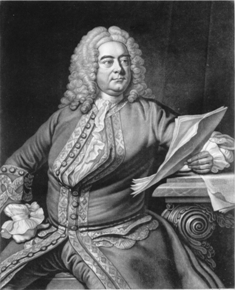 An example of a composer who served both God and others is George Frideric Handel.

It is said that the response to the Opening of Handel’s Messiah was so overwhelming that political enemies actually hugged each other in the foyer after the performance, and even made gestures toward resolving their differences.   That would certainly be an example of a composer being of service to humanity.  To be of optimum service to humanity is to be of show the greatest love; and to show the greatest love is the highest service of God.