After church yesterday morning, I spoke with my pastor briefly. He said he had listened to some of the Eden in Babylon score as posted on this page. Anticipating his objection, I waited for him to elaborate. He phrased it positively when he did, and I’m also certain that he would never have characterized his observation as an “objection.”  It’s just that I’ve heard it all too often before, so I tend to be on guard.  And for good reason – for he basically said what everybody else always says: that he would like to hear it all put together – meaning the singing as well as the instrumentals.

That’s a friendly way of saying that it’s hard to tell from hearing the music alone just how the words are supposed to fit in. People look at lyrics I’ve posted; they listen to the music I’ve posted; and they think “OK – these words are supposed to match up with this music? How, exactly?” It really does put a damper on people’s ability to appreciate what I’m about. I can deny that obvious fact no longer.

So – a logical next move would be round up some singers and put them over the instrumental tracks. But who are these singers?  It is one thing for me proclaim: “I will round them up.”  But what does this mean, precisely?  Round them up – from where?  From whom?  Will they sing for free? The pastor suggested I might be able to use the church facilities, meaning the sound board, the mixer, and the microphones. He hinted at my even using members of the Choir, and I’ll admit there are some awfully decent voices there. But can they handle my style?   Well, perhaps.  But will they truly vibrate with the groove?  Doubtful.  There’s a certain type of worldly, non-churchy vibration in the music itself that lends itself to something a bit down-and-dirty at times.   It’s kind of the pastor to have offered, but it’s also uncomfortably recalling how I could easily find the right singers and pay them what they’re worth – if only I had the money.

But since I don’t, it strikes me that the School of Music might be a more likely place to find competent singers who can sing in the style of my characters and who would enjoy learning this music and recording it with me – possibly even to the point of doing so for free. About paying them, I can sort of “feel it out” when I talk with them, and definitely seek to make an impression on an academic musical level, so that they’ll recognize me as a composer-theoretician, and we can all mutually vibrate on that level as amiably as is to be expected.  Money can be brought up at around about that point.

Also, to sort of wade gently into the unknown waters here, this “rounding up effort” can be realistically restricted to a small number of “character singers” at first. I need Winston, Benzo, Mortalis, and Taura – that’s four.  Throw in a fifth woman for other female parts, and me doing the other male parts, and we have ourselves a pretty decent blend. So that would be five people to concern myself with having to pay, five people with whom I would have concerned myself with “rounding up” to begin with.  Whether the field I tap is the School of Music or anywhere else, if it’s a matter of advertising, then I’ll need to word my advertisements in a compelling manner, as well as cultivate an appealing approach, in general. 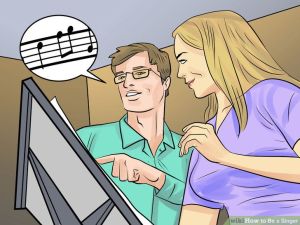 I’ll need a legible score, but that shouldn’t be too much of a problem. I can extract parts from my Finale files. It will only be a problem if I become perfectionist about it, and allow it to enclose me back into isolation. This I can avoid by churning out one number at a time, while in the process of slowly gleaning singers. If we’re only talking about a handful of singers besides myself, whom we may assume will need to be very decent musicians and/or musical theatre people who have a real, built-in reverence for the kind of prodigious accomplishment to be found in the flagrant manifestation of remarkable musical score; then these being the caliber of people whom I seek probably wouldn’t mind working for free at this stage. It’s also possible that maybe I can simultaneously seek some small measure of financial support, so that they won’t have to render their services for absolutely nothing.

The wheels are spinning, anyway. I have a complete script now, so it doesn’t make much sense that the next phase of the project would entail too much more isolation. I ought to be able to use the fact of the completed script to encourage further human involvement, such as by holding a reading. But I don’t want to just focus on that, at the expense of connecting the musical dots, because I feel that to do so is a higher priority.  Although it’s true that I’ve now completed a libretto, I don’t even have a full vocal-score to present to singers or to a musical director, nor do I have (especially) samples of the music including the singing as well as the instrumental accompaniment, on which anyone can clearly hear what the score is all about.  So despite that I’ve completed a script full of text, I still don’t have a completed package.  It’s still not quite marketable.

It does seem, however, that to prepare the next piece of the package will need to involve about five other people, to do it decently, by whom I mean singers, who can sing the different character parts, along with myself, and I can maybe just accompany all the songs on the piano, if that’s the easiest way for them to learn the music, and for me to put it across.  After all, it’s what I’ve been doing all my life – so I might as well  go the extra mile here.  As to exactly where to find these other comrades of the Arts, this is another story.  But I am firmly affixed that this is the next step.

5 thoughts on “The Wheels Are Spinning”