Haughty eyes and a proud heart — the unplowed field of the wicked — produce sin.
— Proverbs 21:4

It’s been pretty crazy in my world the past few days.    I’m feeling like I owe my readers some kind of explanation.  And, at the same time, I’m feeling that my readers probably have no idea what I’m talking about.

Yesterday I freaked out totally over my aging computer’s refusal to cooperate with what I had judged to be an inspired fifteen-staff template for the accompaniment score to my new musical.  The very concept of this score is something that suddenly dawned on me in a flash, giving it the feel of revelation.  In an instant, a solution to two separate problems was revealed to me — both of them longstanding issues that had kept me at a disturbing standstill with regards to my major project.   For a long time, I had been stymied by a pair of dark realities, acting in concert, one with another.  That dastardly duo of dynamics would probably best be described as such:

(1) My inability to motivate myself to create, not only a gargantuan piano-vocal score (the p-v score to my last musical taking up 242 pages on a single 6.4mb pdf file), but even a much less tedious vocal score, which probably would have consumed 100 pages at the most.

(2) My inability to create an attractive enough package, in terms of a listenable instrumental recording of my show tunes, to attract competent singers to work with me on a demo recording.

Because I saw myself become extremely frustrated over both these issues shortly after I finished the first draft of my musical on March 4th of this year, I did not want to repeat the experience after finishing a second, more polished draft only a couple of weeks ago.  I would not want the upcoming months to be like the months following the March 4th milestone.  Yet I felt the frustration start to churn inside my belly, causing brutal upset at a time when I had expected to remain inspired! And behind that frustration was confusion.

I was confused which way to turn.  It seemed on the one hand that, if only I had sufficient money, I could attract singers to my demo project, simply by letting them know I had the cash to pay them.  But I wasn’t coming up with such money, and I could not realistically expect to do so.  So I began to contemplate that my appeal would need to pique the interest of these as-yet-unknown singers, without my having money, solely on the basis of the quality of my work.  This of course is a much higher, if not loftier, artistic objective.  So I began to ponder how to pursue it.

Although I was not too astonished that I didn’t want to embark on another 250-page piano-vocal score, it somewhat disturbed me that I was equally unwilling to dive into a mere vocal score. even though this would be a much less arduous task.  At first, I attributed my resistance to sheer laziness.  This disturbed me.  No one likes to think of themselves as a lazy person, and I would hope that my prolific prodigy, at least with respect to my own Art, would already have been adequately proven by now.

I could feel the deep depression seeking to take root in my spirit.  It was an all too familiar, and quite unwelcome, almost terrifying sensation.

But then, at approximately three in the afternoon last Saturday, something wonderful happened.  As I played with the Finale music notation file of my song The Word from Beyond — the central song of the charismatic protagonist Winston Greene — I realized that I could solve both problems at once in a way that would not cost me any money at the start, and yet keep my enthusiasm for my work renewed.   This realization was based on the revelation that a piano-vocal score, much as it would seem a basic requirement to package the show, is simply irrelevant to the kind of show that Eden in Babylon is, in a modern, technology-driven era.

What, after all, would be the purpose of a piano-vocal score?  It would be for a rehearsal pianist to accompany the singers during rehearsals, and a conductor to conduct the orchestra during performances.  But does Eden in Babylon need a rehearsal accompanist?  No, it does not.   And does it need a live orchestra?   No — it doesn’t need that either.  So why bother?

Many shows are rehearsed these days using a rehearsal CD of an accompaniment similar to that which the singers will hear during the actual performance.  Also, many shows are produced using a recording of a live orchestra.  I’ve seen such shows at theatre companies such as the Utah Shakespeare Festival and the Pacific Conservatory of the Performing Arts.  The singers themselves provide the live element, and usually the audience cannot even tell that the orchestra is “on tape. “

In such performances, the role of the conductor has been altered from that of tradition.  The conductor now conducts the singers on stage, usually wearing a head-set, with which he or she merely listens to the orchestra on a recording.

As I remembered this modern fact, I saw how it applied nicely to my own new musical, and how I could employ my expertise with Finale music notation software to inform a superior production.  For with Finale, I can replicate the sound of a pit orchestra, using the sounds of the Garritan Personal Orchestra that comes with the software.  With only a few more instruments to the template, and I would have my fifteen piece pit orchestra — without having to hire or pay a single musician.

So I set about to create the fifteen staff template described in the previous entry.   Unfortunately, however, the result of my inspired fury will live in the annals of infamy. 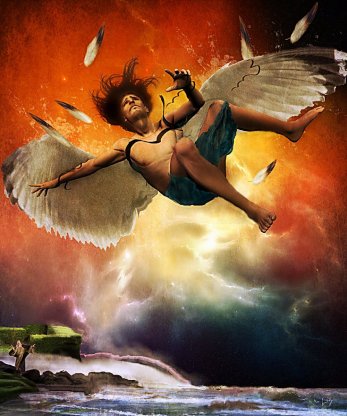 My archaic computer simply could not handle the stress of the added instrumentation.  As it complained beyond repair, my sense of inspiration plummeted to new depths of despair.  I likened myself to Icarus, who dared fly ever higher and higher, and finally too close to the sun.  As a result, his wings were scorched, and he fell unsupported down to the Earth.  His highfalutin plans now “toast.”

As my computer collapsed, so did I myself collapse in kind.  For what are our computers, really, but extensions of our own selves?  My self-collapse turned quickly into rage, as my class issues were aroused.

“A rich man,” I thought, “could very easily replace his broken computer.  But me?  This could set me back for months!”  A bizarre combination of envy and indignation engulfed my spirit.

So I called a sympathetic friend from my church for emotional support.   The upshot was that the fellow gave me far more than mere consolation.  He actually wound up offering to help me with the purchase of a brand new computer!

What an unexpected relief!   For now, the bizarre boulevard on which broken dreams are strewn shall neither sport nor boast my own dreams so abruptly spawned.  For the spool of the Spirit on which such dreams are spun is a spectacle of wonder, cherished like a treasure buried deep within my core heart of hearts, in a place hitherto invisible to others, and now, in a way most mysterious, somehow becoming unearthed.  With the emergence of supportive friends in my life, the energy with which I go about constructing the Template of My Dreams need not be aborted or delayed.   I can move forward still, and mount the music of Eden in Babylon in a manner befitting the marvel that I have inwardly dreamed it to be.

I can easily extract the vocal score from the much larger score that I’ve already endeavored to build.  It will be nothing compared to the larger edifice in which it rests.  If people chide me for going about this the “hard way,” they know nothing of labors of love.  Yes, it will be a lot more work — but it will be a work of wonder that I attack with passion, not a work of drudgery that I avoid with dread.

I can also again rejoice in the miracle that is Moscow, Idaho in my life.  Back in Berkeley, people would understandably look at me and shrug, thinking:

“Andy sure has a problem!  How can we help him to solve it?”

They would shake their heads at a loss, and I would shake mine with them.  But here it is a completely new and refreshing dynamic:

“Andy’s got something to offer! How can we help him to offer it?”

If you can feel the force of such a huge dynamic difference, then you can feel the fact of a former futility transformed to new promise, and purpose, and joy.   I wouldn’t trade my life today for my life of many sorrows past, for all the riches flaunted by every wealthy fool on Earth.

4 thoughts on “The Spool of the Spirit”