The other day on the Q&A site Quora ,someone asked why homeless people don’t go stay with their families.  The person who asked that question seemed a bit naive, so I thought I’d enlighten them.

Again, I can only answer by sharing my personal experience. However, it might point to a generality.

I first became homeless in April 2004. In May of that year, I asked my brother if I could stay at his house, where I knew he had a spare room. He said no. I asked him why? He said: “I won’t expand.”

It hurt me. I was not drinking. I was not on drugs. I was out in the cold. Although at the time, I took it as rejection, I later realized that he needed privacy. He probably had some private practice that he wished not to share with anyone, let alone his brother, who might be disdainful of whatever private habit he indulged. That’s just a theory. But I’ll go on. 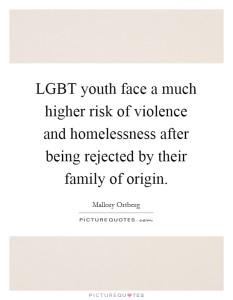 I asked my sister if I could stay at her house. She said no. She, however, gave me a reason. She had a very small house, was aging with health concerns, in a wheelchair, and with live-in care. My presence in the house would not have helped her health, and I can understand that. (She is since deceased.)

I was already running out of relatives, but the point is that once I had asked them all if I could stay there, all of them had said no. At the time, I took it as though there were something terribly wrong with me. But that was not the case. They all had reasons why they couldn’t permit another person in their space.

My best female friend while I was homeless was a woman who had had two strokes, and difficulty speaking. Again, she did not use drugs. But it took great patience to understand what she was saying or trying to do. Her relatives responded by never having her over to their houses, even on holidays and special occasions.

She would cry. “I used to play tennis. I used to wait tables. I used to ride a bicycle.” She would be arrested while she was sleeping, and once spent four nights in jail because the cops had no empathy for her condition. They woke her up because she wasn’t sleeping in the right place – a parking lot — and when she began to talk in strange half-words, they clamped handcuffs on her and put her in a jail.

In other words, she was criminalized for being gravely disabled, and for sleeping.

Believe me, I was homeless for a lot of years. People seemed to think it should have been easy for me to have pulled out of it. But for the better part of twelve years, all roads in the San Francisco Bay Area only led back to homelessness. People would ask me: “What about the halfway house? The rehabs? The shelters? The board and care homes?” Board and care, maybe, I can see that — if I were the type who wanted to completely give up all his freedoms. But I’m not that type – thank God. So it wasn’t too long before I realized that all the well-meaning advice was useless. Those advisers had never been homeless, and they had never been me.

All roads led me back to a quiet spot beneath the stars where nobody could find me and where I could say my prayers. That I am now living indoors and free to illuminate the sordid realities of homelessness to those who do not know, is the answer to those prayers.

I hope this helps.