Recently I’ve been answering questions pertaining to homelessness on Quora, a site dedicated to the distribution of useful, factual information.  Below is a transcript of my answer to the question: “What do homeless people do when they get sick?”

I would like to address this one in a hopefully unbiased way based entirely on my own personal experience as one who once spent the better part of twelve years on the streets.

The short answer is: they don’t. E.R. rooms in hospitals are not accustomed to accepting someone who has caught a severe cold or a bad case of the flu and doing anything other than providing them with medicines and advising them to rest in bed for 7–10 days. The problem with this, for the homeless person, is that they like-as-not don’t have a bed to rest in.

I watched five people die of hypothermia overnight when a mere two dollars would have afforded any one of them an all night stay on a bus, in order to get warm. Bus drivers in my area were notorious for showing no mercy to homeless people when they didn’t have proper fare, even if the bus was only sparsely populated on a graveyard run.

Myself, I am fortunate enough to have been gifted with an unusually strong immune system. Throughout the twelve years, I only caught a flu twice. 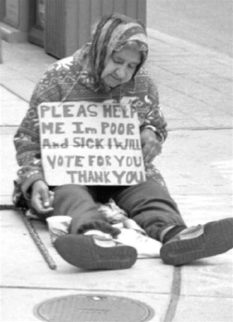 The first time was roughly nine years into my homeless experience, in December of 2013. When my friend on the East Coast (3000 miles away from me) found out I was ailing, she immediately sent me $700 off of her credit card, asking me to pay it all back at the beginning of the month, when I got my government check. The idea was to put me in a hotel room for 7–10 days so I could recover in full.

I did recover, and I did pay her back, though it took most of my government check. It was worth it, to spare my life.

The mistake I made there was honesty. Lots of guys in the men’s dormitory at the shelter were heaving and wheezing and coughing like mad. I was the only one who went to the doctor to try and do anything about it, and who let the shelter managers know what was up. So out I went into the cold.

Returning to the hospital, I implored them to let me stay there overnight. They declined, on the basis that homeless people came in all the time requesting overnight stays on various pretexts. So, they reasoned, if they let me in, they’d have to let the whole lot of us in. No can do.

After that I tried an all-night bus. But the riders on the bus complained so much about my obviously sick condition, they got the driver to kick me out.

Left out in the elements with the flu, the rest is history. My story is told on my blog Eden in Babylon under the title “Somebody Gave Easily.” (It has also been published in Street Spirit.) If you’re interested, you can find the pertinent stories and read them.

The upshot was that I fell down on my knees and pleaded with God to put an end to twelve years of totally unpredictable, totally unreliable, anything-can-happen-anywhere-anytime Homelessness. That prayer was answered.

Two weeks later I had an apartment in another State, and three weeks later I had a job — after being considered unemployable for over 12 years in the San Francisco Bay Area. Prayer works, when it is delivered with fervency, from the heart.