On the Q&A site Quora, dedicated to the dissemination of knowledge by those “in the know,” I was asked if I thought there was anything wrong with being “homeless by choice.”  Here’s my answer:

There is nothing morally wrong with being homeless by choice. One has a right to do whatever they wish to do as long as it does not impinge upon the rights of others. Therefore, if one wants to be homeless, and one is not harming anyone in the process, one can rightly exercise that choice.

However, this does beg the question as to why one would want to be homeless by choice; and in fact, if one choosing to be homeless is actually choosing a preferred lifestyle, or merely the lesser of evils in an untenable situation. 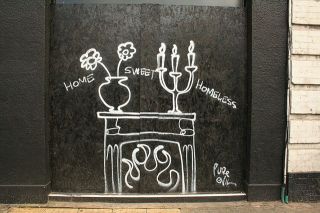 There are three general reasons why one would “choose” being homeless over an indoor living situation:

(2) abuse or neglect in the indoor situation

(3) inability to keep up with the cost of living indoors

I was homeless in the San Francisco Bay Area for many years.  As I stated in this post, I often had a difficult time with shelters and other group situations due to the lack of privacy. I also found it next-to-impossible to keep up with the rising cost of living in the San Francisco Bay Area. The trade-off was made palatable due to my not having to pay exorbitant rental fees, often subjected to rent increases every six months.

Although I personally would not have characterized any of my living situations as “abusive,” I certainly have met numerous people, mostly young people, who chose to live “home free” following emancipation from abusive parents or guardians. To many of them, the idea of living indoors was associated with bondage, violence, and sexual violation. Of course they should not be faulted for wishing to escape such horrible home lives. This is why many such young people will not use the term “homeless” to describe their lifestyle. They prefer the term “home free” — and this is telling.