When I was homeless in the San Francisco Bay Area, I had an awfully hard time getting myself to a bathroom on any kind of regular basis.

It wasn’t so bad when I only had to go No.1, as we used to call it.  I could usually find some kind of bush to duck behind, and the cleanup process wasn’t nearly so involved.  Also, the sense of stigma or shame attached to the act of having to pee outdoors wasn’t nearly so severe as the corresponding sense of shame involved in having to go No.2.

But I tell ya – when you gotta go, you gotta go.   There were times when I held it in for an hour and a half or more.  Only one thing was on my mind as I went from bathroom to bathroom, finding all of them locked, and getting the sense that whoever was in there wasn’t about to step out in the near future.

I’ll never forget how one day, I finally gave up, because I just couldn’t hold it any longer.  I found a fairly secluded path of greenery, and figured I could use the large leaves for toilet paper.

“Let’s make this quick,” I said to myself, looking from side to side.  Squatting, I did the deed as thoroughly as I could possibly manage in a fairly paranoid five-second interval.  Then I reached for the leaves.

At that exact moment, about twenty U.C.Berkeley co-eds came waltzing around the corner, smiling and chatting merrily amongst themselves.  You should have seen the look on their eyes when they saw what I was about.  (I’m sure the look on my own eyes was a sight to see, as well.)

All of these musings come in the wake of San Francisco Mayor London Breed’s recent comments that “homeless advocacy groups that receive funding from the city need to better educate the homeless to ‘clean up after themselves.'”  She went on to say: “there is more feces on the sidewalks than I’ve ever seen growing up here. That is a huge problem and we are not just talking about from dogs.” 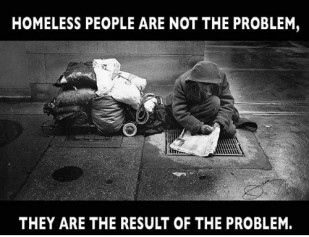 While these comments may seem to many to be fairly sensible at face value, I would have to say — from the perspective of a person who spent several years swimming the quicksand of homelessness in the S.F.Bay Area — that the mayor’s insights are rather shallow.  While I personally never had to take a shit on the sidewalk, can you imagine the difficulty I would have had in “clean-up” if I had?   For one thing, what would I have used to clean up the feces?   Certainly not toilet paper.  If I’d had access to toilet paper, I’d have had access to one of the many locked bathrooms I wasn’t able to get into.  And that’s the very situation that would have driven me to have to take a dump outdoors in the first place.

Would I use my shirt?  Perhaps the only shirt I had?  Somebody else’s shirt?  A rag of some sort that I would have readily acquired — from where, exactly?  What about a dustpan?  Or a make shift dustpan, quickly constructed from — from what exactly?

Let’s get real here, people.  We’re talking about homelessness.  The homeless person is at an incredible disadvantage compared to just about any other person in today’s society.  There were times when I was virtually immobilized for hours or even days because I couldn’t come up with a pair of shoelaces, and I basically had to sit still, penniless, until the money to buy them surfaced.  Under such conditions, in the time it would have taken me to come up with a viable device to wipe my shit off of the sidewalk, there could easily have been KRON news cameras covering the scene, further prompting the ludicrosity of such comments as Mayor Breed was so quick to make.

Anybody making a visit to downtown San Francisco will easily observe that the demand for usable bathromms exceeds the supply by a ratio of at least 100-1.  Rather than focus her energies on further demeaning the homeless and inferring that homeless rights advocates are not doing their job properly, why doesn’t the Mayor funnel some energies into adjusting the budget to include more portable toilets in the Financial District?

I would further submit it is not only homeless people who are affected by the appalling lack of public bathrooms in the Bay Area.  Recently, a security camera in San Francisco’s SOMA district caught both a truck driver and a non-profit employee defecating on the sidewalk.  Afterward, they simply walked away to carry on with the rest of their days.  Why is it assumed that all this feces comes from homeless people?

What all of this points to is the overall refusal of society to recognize that homeless people are not the problem — they are the result of the problem.   If statistics are correct and there are in fact only 7500 visible homeless people in San Francisco, how difficult would it be to budget in 7500 tiny houses, and encourage each homeless person to live indoors in privacy and dignity?

Sure, not every homeless person would go for it.  But a lot of them would — I know I sure would have — and it would be a step in the right direction.  At least the homeless individual would be treated as a full human being whose needs and rights are being considered along with those of the rest of the human race — not like a pariah, an outcast, or a leper.

We really need to take that leap.  Remember that homeless people were not, as a general rule, born homeless.  None of us were born on drugs or drunk or severely mentally disabled.   If we became that way, it was largely the result of having to cope with the extreme conditions of street life, and of having to struggle for survival night after night, and year after year.  It was not the other way around.