The third story in my Homeless No More column has now been published on Street Spirit.  A link to the September issue — by far the best issue since Alastair Boone took over as editor-in-chief is below.   Following that is a verbatim transcript of my article as it appears in the September paper. 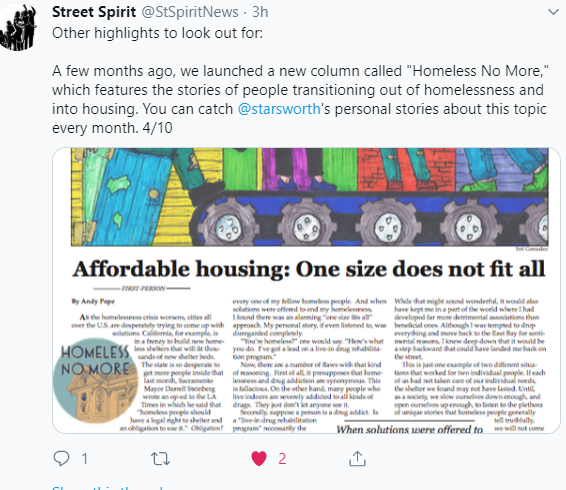 As the homelessness crisis worsens, cities all over the U.S. are desperately trying to come up with solutions. California, for example, is in a frenzy to build new homeless shelters that will fit thousands of new shelter beds. The state is so desperate to get more people inside that last month, Sacramento Mayor Darrell Steinberg wrote an op-ed to the LA Times in which he said that “homeless people should have a legal right to shelter and an obligation to use it.”

Obligation?  To obligate homeless people to sleep in shelters would be a violation of their constitutional rights.  Where a person sleeps should be up to that individual, so long as they are not sleeping on private property without owner consent.

Now, it would definitely be a good thing to increase California’s shelter capacity.  But aside from the issue of human rights, there are many practical reasons why to force homeless people to sleep in shelters is not a good thing.  One of them is that there is no way that one shelter program will be able to fit the needs of the diverse group of individuals who make up California’s homeless community.

This seems to be a trend in how the general population thinks about “the homeless.”  Our society appears to be obsessed with putting people into boxes.  Rather than take the time to actually get to know an individual for who they are uniquely, we like to make snap judgments about them according to their appearance.  For example, if a man is seen flying a sign on a sidewalk, we think: “That guy’s a lazy bum.” Why a lazy bum?  Couldn’t that guy just be down on his luck?

In my personal experience, I have never been stigmatized more than when I was a homeless person. I was lumped into the same box as virtually every one of my fellow homeless people. And when solutions were offered to end my homelessness, I found there was an alarming “one size fits all” approach. My personal story, if even listened to, was disregarded completely.

“You’re homeless?” one would say. “Here’s what you do. I’ve got a lead on a live-in drug rehabilitation program.”

Now, there are a number of flaws with that kind of reasoning. First of all, it presupposes that homelessness and drug addiction are synonymous.  This is fallacious.  On the other hand, many people who live indoors are severely addicted to all kinds of drugs. They just don’t let anyone see it.

Secondly, suppose a person is a drug addict.  Is a “live-in drug rehabilitation program” necessarily the solution for them?  There are twelve-step programs, sober living environments, a program at Kaiser called LifeRing, and a program called Rational Recovery.  Similarly, if one is homeless, one might be directed toward a board-and-care home, a live-in psychiatric facility, a halfway house, or transitional housing.  And those options will work for many people.

I spoke with a formerly homeless woman who enrolled in in a transitional housing facility and spent seven months there, giving them a percentage of her disability check every month.  At the end of the seven months, she had enough money to pay the first and last months rent and security deposit on a studio apartment.  She seemed quite content with her situation the last time I saw her.

I myself received a call from someone at the Berkeley Food and Housing Administration shortly after I left Berkeley for another State.  It turned out that my name had come up on a list of senior housing options, and they were willing to offer me my own one-bedroom apartment near Lake Merritt.  While that might sound wonderful, it would also have kept me in a part of the world where I had developed far more detrimental associations than beneficial ones.  Although I was tempted to drop everything and move back to the East Bay for sentimental reasons, I knew deep down that it would be a step backward that could have landed me back on the streets.

This is just one example of two different situations that worked for two individual people.  If each of us had not taken care of our individual needs, the shelter we found may not have lasted.  Until, as a society, we slow ourselves down enough, and open ourselves up enough, to listen to the plethora of unique stories that homeless people generally tell truthfully, we will not come close to solving the “homeless problem.”

So, while transitional housing programs and halfway houses have their place, a true solution to the homeless predicament will never be reached until we recognize that the homeless person is an individual, endowed with rights to life, liberty, and the pursuit of happiness no more and no less than anyone else on the planet.  As long as the wall of division that separates a “person” from a “homeless person” still stands, no lasting solution will be attained.

Homeless No More is a column that features the stories of people making the transition from homelessness to housing.  Andy Pope is a freelance writer who lives in the Pacific Northwest.