Of the five “inequities” that I have chosen to discuss in an effort to illuminate how the world appears from the eyes of those who have been chronically homeless in large urban areas, this one will probably be the most controversial.   There is a huge disparity among all those who dwell on this subject as to how the homeless person can actually be helped.

When I made the decision to join an intentional homeless community on April 15, 2011, I was thrown into a group of people who were predominantly White, mostly male, and mostly people who had worked all their lives until some costly crisis landed them on the streets.  Most of my fellow White male homeless people were lifelong conservatives, and it was bizarrely expected that all of them were supposed to change their lifelong political ideologies, and become “liberals,” only because they had fallen on hard times.

Why?  Because in the failed social experiment that is the City of Berkeley, the pseudo-socialist leaders of the churches that were feeding us believed that, because we had become homeless, our life-philosophies must have failed us, and they were eager to teach us another way.  The idea that anybody in the San Francisco Bay Area could have become homeless due to socio-economic factors entirely beyond their control — viz, a one-bedroom apartment in San Francisco might rent for upwards of $3000/mo — was never brought into consideration.   So we, who comprised approximately 35% of the then one thousand visible homeless people in Berkeley, were lumped into the same group as practicing thieves, hustlers, and hardened criminals on the one hand, and completely developmentally disabled (or at least chronically unemployable) individuals on the other.

In the process, we found ourselves continually demeaned and dehumanized by social workers whose politics invariably leaned to the Left.  My lifelong identity meant nothing to these people, and the none-too-subtle message that I would be homeless for the rest of my days — and rightly so — was hammered into me day in and day out, until I found myself beginning to believe it.

Those who leaned to the Right were another story.  I usually did not feel dehumanized per se, but I often felt stereotyped and stigmatized.  An example would be in Salvation Army workers trying to “save” me or convert me to Christianity, when the truth was that I was already a Christian who was clinging to Jesus more than ever during an uneasy, unsettling time of life.

My first experience at a homeless “feed” was that I and others were treated with complete indignity.  It was assumed that we were either criminally minded, completely mentally handicapped, or both.  Security guards barked orders at us and herded us around like cattle.  All this to get a bite to eat?   No, thanks!

Somebody I met throughout this process told me I ought to try “flying a sign.”  I had no idea what the expression meant at the time, but he showed me that all I had to do was sit silently on the sidewalk with a piece of cardboard and an explanatory statement, and I would probably get cash and food within a three or four hour shift.  (I’m glad he included the word “silently,” because I tried using the words “can you spare some change?” once and only once.  The judgmental shaking of the head and scornful reply, “Not for you, buddy!” was enough to convince me that verbal begging was not for me.)

But in displaying my sign in silence, making eye contact with passersby, I found that I averaged about $17/day working three hours daily at my “spot,” and often got a sandwich or two as well.   I usually sat there between about 9 am and noon.   After that, I felt free to vacate the homeless pandemonium, get on a BART train, and find a place where I could chill out, plug in my laptop (if it hadn’t gotten stolen) and gather my bearings for the next morning on the streets.

Those with whom I associated agreed with me that all of these homeless services, aside from being demeaning, primarily served to keep homeless people homeless.  And as far as the homeless “feeds,” it became clear after a while that they were simply feeding the wrong people.

Think about it.  If you were a street hustler who never cared to do a lick of decent work in your life, and you wanted to get food without working for it, where would you turn?  Of course you would head to one of those community meals.   You would do anything you could to get something for nothing — even steal.

The sad thing is that people with legitimate disabilities who needed caregivers and case workers, and who would thrive best in situations like board-and-care homes, were also mixed into the batch.   Many of them were stuck in the cracks of the system, and I saw quite a few die on the streets.

Another sad thing — or rather a maddening thing — is that it was assumed that I and my similar companions were unemployable, assumed we had landed on the streets due to drug addiction or alcoholism, assumed  we were insane, and basically assumed that unless we thought as they did, acted in the manner they wanted us to act, and believed the ideology that they wanted us to believe, then there was something wrong with us.

Although I did vacate the premises after 19 months in order to rent a cottage in a rural area in the Central Valley — and there created nine talks on the subject based on what I had learned thus far — I wish I hadn’t been so eager to get inside.  The place I landed was in a horrible area, surrounded by tweakers, and it dawned on me that there weren’t too many places in that part of California where I could get a place in the $400/mo. range that were going to be any different.   So, once I finished the 9th talk, I returned to Berkeley for more research.

Three years later, I was having the devil of a time digging myself out of the hole that had been dug.   Years of sleep deprivation began to wear on my mental health.   I was constantly being awakened in the middle of the night by other homeless people (if not cops or security guards), my belongings would disappear over night, and I even dabbled in street drugs in an effort to keep my sanity and desensitize myself from all the chaos.

My self-esteem grew lower and lower.   Social workers who wanted to “help” me referred me to all kinds of programs with strict regimens, and I found I didn’t belong in any of them.  Not to mention, I’m one of those Introverted types who cherishes his privacy, and I learned that I would rather sleep outdoors in secluded spots on the outskirts of town, than stay crammed into a homeless shelter with about fifty other guys, where the rate of theft was even greater.

Finally, after one particularly disturbing instance when I was kicked out of a homeless shelter because I had caught the flu there, I got down on my knees and shouted to Whoever might hear my prayer:

I literally screamed that petition to the stars of a seemingly indifferent sky, hurting my knees from the impact of the concrete outside the Sequoia Station in Redwood City.

Long story short (and it’s a story that has been often told elsewhere), within three or four weeks, I had an affordable room in North Idaho, renting for about one fourth of what it would have rented in Berkeley, and a job playing piano at a small church, after being considered unemployable and mentally insane in the State of California for years.

How did I get there?  It wasn’t from a handout.  It was from a hand-up – in the form of a $200 bus ticket granted by an old associate of mine, a retired music teacher whom I’d worked with years ago on the San Francisco Bay Area Peninsula, before all of the sordid homelessness began.

Which brings me to my point.  The only homeless people who are into receiving “hand outs” from the system are those who either cannot fend for themselves, or choose not to, because they’d rather work the system.  The rest could use a hand-up.  I got one, and three and a half years later, on Thanksgiving Day, I must say I am thankful.  I’ve paid my rent on time in a place of my own choosing, a place of solitude and dignity, since September 1st, 2016.

So let that be food for thought on Thanksgiving Day.   You may use this information as you choose.   Maybe if somebody gives a hand-up to a person who could truly use it, then Somebody will give a hand-up to you. 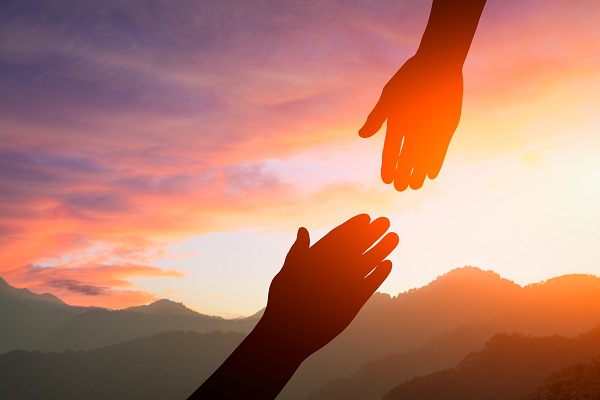