Below is a verbatim transcript of my column Rebuilding Trust by Strengthening the “Homeless Link” as it was recently published on the independent news site, Spokane Faith and Values, under the editorship of Tracy Simmons.

When asked to write about our need to address the erosion of trust in our national consciousness, the first thing that crossed my mind is that I’ve never fully succeeded at rebuilding trust on a personal level. But I don’t think this failure is unique to me alone.

In today’s society, when friendships or business relationships go sour, it is much more likely that one will simply “move on” than that a person will expend the energy needed to repair a broken relationship. After all, such an energy expense is often painful, and people don’t like to endure pain unless it’s absolutely necessary. And with so many options for replacing unfavorable associations with more promising ones, why should one concern oneself with mending fences?

Through increased mobility and the phenomenal interactive potential of social media, it’s more accurate to depict people as jumping several fences in succession – more-or-less like hurdles in a track meet – than going back to mend any of them. The unusual ease with which people sever their personal contacts these days is assisted by the fact that through electronic communications and social media, one is able to block, delete, or ignore someone completely unilaterally. People take advantage of this convenience, often without prior word of warning or common courtesy.

Though social media has the potential to build bridges, it also helps us to burn them. Our worlds have become increasingly fragmented, and it is common on instant messengers for people to drop out of conversations abruptly and leap over to a new conversation without answering the last question or even saying goodbye. How can trust possibly be built when so many interactions are left incomplete?

Moreover, busy people may receive 500 emails a day and not have time to answer five of them. We have come to accept non-response as a response, but what does that response say? We have no idea, really. We only know that they won’t talk to us, we don’t know why, and the mass phenomenon of all this electronic dismissal, one of another, has eaten away at the morale of an entire nation.

If we’re going to think about rebuilding trust, we need first to consider that there will never be trust at the expense of communication. This applies not only to personal relationships, but to human associations at all levels of society. We don’t trust our educational system, we don’t trust our clergy, we don’t trust the politicians whom we have elected to represent us, and we certainly don’t trust corporate officers. While I would be the last to advocate a reactionary return to a less inclusive era, I will be the first to propose that a revival of misplaced values such as common courtesy and mutual respect would be a good place to start if we are to go about rebuilding trust on a grander scale.

Our devaluing of respectful communication is, to my view, a function of our inordinate love of personal pleasures. It is natural that in a culture so fraught with danger, we would seek escape in diversions that distract us from our troubles. But for many, it has become more important to feel good than to do good. When given a choice between feeling good and doing good, we often choose the former. 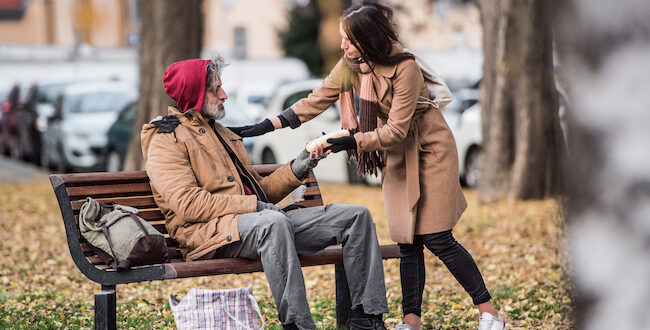 A man storms out of the house after an argument with his wife. Instead of returning to bless her with a surprise bouquet, he takes that money to a poker game and escapes into a night of male bonding with the boys. We take our ten dollar bills to the movie theater in order to entertain ourselves, and we ignore the beggar outside the theater whose life might end in the cold that night if he doesn’t get two dollars for an all-night bus pass. We justify our self-serving nature by rationalizing that the person on the other end of our avarice has made bad choices in their lives, and that they need to learn from their mistakes by being deprived of basic needs. But we are neither gods nor goddesses, and no human being is in the moral position to judge another for their station in life, especially when we have no idea what the conditions were that got them there.

As cities become more congested, and the rapid pace of life accelerates, we stigmatize. We hesitate to take the time to listen to the unique stories of those who cross our paths. Instead, we view people according to what “box” we can place them in. The box of leftie. The box of drug addict. The boxes of codependent, feminist, fundamentalist. The list goes on and on. We judge people according to their “boxes,” rather than recognize them as the unique individuals whom they are.

Nowhere is this stereotyping more flagrant than in typical attitudes toward the homeless. Every homeless person has their story, and I have found that these stories are generally told truthfully. But because of our fast-paced agendas and stigmatic notions as to what the homeless are about, we don’t stop to engage these fellow citizens, especially if we feel interrupted. People do not like to witness visible poverty in all its ugliness, so we turn our heads away from the very people who may need our attention the most.

In hearing any stranger’s story, of course we will have doubts as to its veracity. In the case of a homeless stranger’s story, one often suspects it is only a covert plea for financial assistance. But how do we know that if we don’t stop to hear them out? The fact is, unless the homeless person is visibly drunk or loaded, we have no idea how they are going to spend that money. A recent study by the National Council on Alcoholism and Drug Addiction estimates that 27 percent of homeless people are drug-addicted. Yet I have lived in big cities where homelessness and drug addiction are thought to be synonymous in the eyes of passersby.

Well, we think, if we give the homeless person food, then we’re still doing good, and we’re on the safe side. So we drop some food off every now and then and wash our hands of the matter. What matter? The matter that we haven’t engaged them, we haven’t heard their voices. We haven’t made no effort to discern whether a hand-up might be more applicable than a hand-out.

I’m not suggesting we cease to feed the hungry. I’m suggesting we get to know the hungry. Talk to a homeless person about something other than their homelessness. Take the time to learn what kind of person they are. Do they want to remain homeless all their lives? Some do. Most don’t. The only way we come to find out is by involving them, by treating the homeless with dignity — as equals, with respect — and not as lesser sub-human mutants or inanimate objects to step over around and over whilst they sleep.

That is the core of the true homeless problem, and it also would be a great place to start in rebuilding trust within the society as a whole. If we want to restore unity in a divided culture, why don’t we first bring inclusion to those who have been the most abandoned? In doing so, we could conceivably inaugurate a chain reaction, and trust may be ignited all the way up the scale. A chain, after all, is only as strong as its weakest link. What link could possibly be weaker than that of the homeless?

I say we strengthen the Homeless Link. Provide for a homeless person neither pity nor judgment, but encouragement, hope, and respect. Maybe — just maybe — this is what it will take to renew the lost strength of an entire nation.

5 thoughts on “The Homeless Link”