Q. You’ve been convicted of a crime?

A. Not that kind of conviction.

Q. Can you elaborate?

A. I’m convicted!  Does the word mean nothing to you?

Q. Why should it?

A. There was a massive movement throughout America, I guess it started in the late 70’s.  35% of Americans began identifying themselves as “born again Christian” — and they were markedly more conservative than the average voter.

Q. What’s this got to do with conviction?

A. It became Christian slang for a person to say there were “convicted” when they believed that the Spirit was impressing upon them some thing that they should or should not do.

A. Not exactly.  One can feel guilty even if one has done nothing wrong.   There are many sources of guilt, and not all of them are positive.

Q. But conviction is always positive?

Q. Well then!  What are you convicted about?

A. Both.  But the latter seems more salient, and to the point.

Q. What is that you ought to be doing right?

A. Something that doesn’t come natural to me.  But every sign is pointing that I do it.

A. I hesitate to say.

A. I’m supposed to take on these — um — roles.  In the community here.  One is that of being a mediator.   Another, a mentor.

Q. Mediator?  Mediator over what?

A. I seem to have been selected to smooth relations between two neighboring businesses.

A. Because I am involved in both businesses, one on a volunteer basis, and one as a hanger-outer in a coffee shop.

Q. What is the essence of the tension between the two establishments?

A. Culture clash.   You see, the people next door from the coffee house are involved in trying to get their lives back together.   A lot of them  have been on drugs, or on the streets, or otherwise severely traumatized.  Some of them have serious mental health conditions.   The point is, many of them come across in confusing ways that don’t fit the social norms.

A. Absolutely!  It’s just that the people in the coffee house don’t necessarily know that.

Q. What are the people in the coffee house like?

A. Quiet, studious, and reserved.

Q. And the people from the place next door?

A. Loud, boisterous, and unrefined.

Q. So you’re supposed to be a go-between?

A. Yes.  I’m supposed to gently tell them not to be too loud around the coffee house, or cuss too much, or refer to themselves and others in derogatory terms.   And I’m supposed to explain and defend them to the baristas who may feel uneasy in their presence.

A. Well, yeah.  It’s better than if the owners had decided just to kick them out of the coffeehouse.  But it’s still a strange position for me to be in.  I have no experience in this area.

Q. So how will you go about this?

Q. Will you wear a badge?

A. Not on your life.

Q. What about the mentoring?

A. That’s a little more down my alley.   You see, this guy died last month.  A dear friend of mine.  Here’s a picture of him: 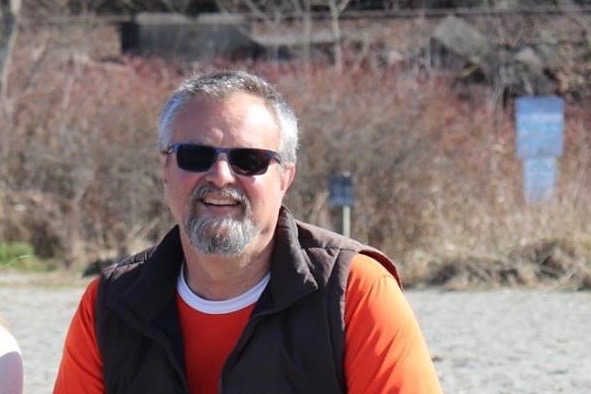 Q. Wasn’t he a little young to die?

A. Young like mid-50’s.  Fit, healthy, vibrant.  Paul caught some kind of flu, turned to pneumonia, turned to a staph infection, then sepsis – and he was gone in about ten days.  He was a great musician – and a great guy.  It shocked the entire community, and left a great void.

Q. What’s this got to do with mentoring?

A. Paul was a mentor and a role model for many of the younger musicians in the community.  He played about ten different instruments, freely played music with all, and encouraged all musicians to embrace and develop their full potential.

Q. And you are supposed to do this in his stead?

A. No one can replace Paul.  But I get this sense that I’m supposed to break out of my shell somewhat, and contact some of the musicians, and see if I can be of help in any way.  In fact, there’s these two brothers who play music — they’re both in their early to mid twenties, and one of them is a fantastic bass player.  Their dad actually approached me.  He said point blank that I am the one to fulfill this role.

Q. How does that make you feel?

A. Only because I’ve never done it before.

Q. Is that really true, Andy?

A. Well — not for a long time.  I used to be a music teacher, and a musical director for musical theatre productions.   I saw that the kids looked up to me, and I enjoyed passing off my knowledge as best I could.

Q. Then what happened?

A. I think you know what happened.  But let’s just say I was no longer in the position where anybody would see me as either a mentor or a mediator.

A. Somehow, yes — however magically.

Q. So what are you going to do about this conviction?

A. I’m gonna just do it.  I called the bass player, and we’re going to jam at my place on Saturday.   Paul’s 26 year old daughter, herself a singer-songwriter, is going to show up later on this morning with her guitar.

Q. Why does this seem strange to you?  I mean, you’re a musician, right?

A. If you want the truth, the reason I feel so convicted is that it’s making me realize what a self-preoccupied egomaniac I have been throughout most of the past fifteen years.  I’ve lived largely in my head, and not in the world of people.  It started when I was — homeless.  The world of people was too painful to face continually.  So I developed my inner creative world to a new peak, in order to block out the pain of the world around me.

But now, in the world around me — at least in my immediate community — there is very little pain.   Yet for over 3 1/2 years, I’ve persisted in living in my head.  This will give me a chance to get out of my head, and do good things for others, for a change.

Q. And how does that make you feel?

A. It makes me feel good.  Today is the first day in forever that my restless spirit has been at peace.