(1) Slept well and got up at the preferred time of around 4:40 in the morning, wide awake and ready to go.  I really prefer the waking hours to the sleeping ones — especially considering that throughout a large part of my life, I was in much more danger when I was sleeping than when I was awake.

(2) Remembered to have a carefully measured cup of coffee ready to drink at home this morning, rather than have to hustle in order to obtain a cup of coffee.   Now that I have the privilege of making my own coffee in the morning, I better be keen to exercise that privilege.   Some of the maneuvers I’ve had to go through in my day to secure a morning cup of Joe have not been pleasant.

(3) Nice talk with my friend Danielle early this morning.  I really enjoy the conversations we have when she’s driving to work in the morning on the East Coast, three hours different from me.   It’s one of the nicer perks of being an early riser.

(4) Ran two miles this morning, my first run for ten days.  Ran right past the old guy walking his dog who made fun of me last time.  Ran past him quickly without looking, and he didn’t say anything.  Eager to get in shape so that none of those scoffers will find a reason to poke fun at me.  Thankful I have two strong legs, a good set of lungs, and I can still run after all these years.   Let’s put it this way — these two miles had a much better effect on me than the first time I tried running a couple miles — back on April 9, 1976.

(5) Took a shower — and once again, that’s a privilege I ought not to neglect.   This here apartment is the first time since 2010 when taking a shower has actually been a private, personal practice not to be observed or interrupted by others.  Grateful for my own shower, and for early morning solitude.

(6) My first story for my new column Homeless No More has been published in this month’s Street Spirit.   Also my editor attended the INSP Summit for the first time, involving over 300 street papers.

(7) Rehearsals for the concert reading of my musical about Youth Homelessness, entitled Eden in Babylon, have been going remarkably well.   Although it dismayed me that when I was homeless in Berkeley, there was nobody in the whole town who wanted to see my musical produced; it is wonderful to be noticing that there is nobody in the present town — where I am not homeless — who does not want to see my musical produced.

(8) Randomly did eight quick push-ups getting out of the shower.   Waited a while, then did 10 push-ups in the second set.  So I did 18 push-ups.   (Thought you should know.)

(9) Vital signs were surprisingly good at the doctor’s office the other day: blood pressure 110/70, heart rate 58.   Probably all the bicycling has helped recently.   Thankful for all the help in getting me a new bicycle seat, soon to replace the broken one.

(10) It’s 7:20 in the morning.  Soon I’ll be at the Courtyard, eating a full traditional breakfast for $3, plus free unlimited Starbucks coffee refills.   I somehow prefer this to the community breakfast where I was banned permanently for barking back at the security guard who kept barking orders at me before I could get a morning cup of coffee into my system.  (Guess it all boils down to how hard one has to work to obtain a cup of coffee in the morning.)  God is Good.

(1) Although my obsession with my current project kept me up till 2:30 in the morning, I managed to sleep fairly solidly between 2:30 & 7:30. Very thankful for the restorative power of sleep.

(2) Succeeding in solving about eight different problems with one decision, I finally have a full cast for the show. I am now wearing two hats — not three — and am greatly relieved.

(3) Latah Recovery Center. The camaraderie in that building is like no other place I know.

(4) My new computer will be arriving tomorrow.   Grateful for the compassionate assistance of all the people who pitched in to make sure I would have a computer capable of handling the work I need to do for this project.

(5) It’s a beautiful day here — more like Summer than Spring.   It’s Memorial Day, and no matter what that may mean for different sorts of people, I can’t help but have noticed that all sorts of people are smiling all around town.

(6) I’m grateful for my friend Danielle, who has been helping me tremendously with the managing of my personal finances.

(7) My new bicycle.  Grateful for the friend who gave it to me.  Grateful for how it gets me to places I need to go so much faster than always having to walk everywhere.  Also grateful for the many fine bike paths, and for being able finally to get myself to some of the neighboring towns.  It feels like a “stepping stone” between my former ways as a total pedestrian, and the long-awaited day when I will finally have a car.

(8) My friends Marilyn and Melissa, whom I met at the Center a couple years ago.  They’re both doing so much better now than ever before.

(9) In a flash, I figured out how to solve all the problems in Act 2, Scene 3 that have kept me hassled and stymied for months now.   I immediately reported my “flash” on my Twitter in two successive blasts as follows: 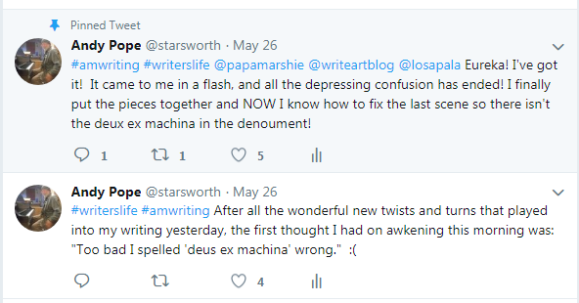 (10) In a somewhat gentler flash, I realized why I’ve felt so hassled with regards to my work.  I’ve been acting as though my work is the top priority, the be-all-and-end-all.  This is not the case!  Life is full of other aspects.  All work and no play makes Jack a dull boy.  Not sure if I’m dull ‘yet — but if I keep working so hard to the exclusion of all other things, I’ll be dull as can be in an untimely grave.   So I want to say that I am grateful for this revelation, and of all the colors of the rainbow that is Life.

(1) Managed to get three hours of sleep last night, with dreams even, following one of those long dark nights of the soul.  Slept from about 5 till 8 in the morning.  Glad I got some rest, and glad I can take it easy today.

(2) My daughter is doing so well now.  I and her other friends received her first Gratitude List yesterday — and she thanked me for the idea.  She really has a lot to be thankful for these days, and she knows it.

(3) Latah Recovery Center.  We are here for us when we need us.  It’s like no other place in town.

(5) It’s a beautiful Spring day in the city of my birth.

(6) I can’t help but have noticed that the director of my show sees eye to eye to me.  We are getting along well, and communicating really well, too.  I am also very impressed with the female lead, and others on board, as well.

(7) I have a bicycle now.  It’s fun, and it greatly decreases the amount of time it takes to get from A to B.

(10) I have a lot of problems in my life right now.  But when I think of the blessings, I am renewed in hope.  His blessings are new every morning.  Great is His faithfulness.

1. Slept seven hours from about midnight till seven.

2. Rode the new bicycle several miles. It seems to work well as long as I don’t change gears.

3. It’s nice being a musical director of a musical again, and working with college students.

4. Noticed my walk was very brisk last night, and no longer seemed uncoordinated. Similarly I brisk-walked about four miles this morning, stopping only for a doppio and quick chat with Dave along the way.

5. I was struggling with getting up this morning, tossing around unmotivated, when the thought suddenly energized me: “Hey! Thinks aren’t that bad!” At that, I bounded up out of bed and smelled the coffee.

6. It’s possible I get a Street Spirit check today, as the first story in my new column was published in the May issue. If not, I’ll get one shortly.

7. Deciding to work from home today is a stress-reliever. This computer at home is about ten times faster than my aging laptop when it comes to formatting music notation files.

8. The first read-thru of the show went well, was fun and was useful. This is the case even though there were several absentees.

9. I may be able to receive a form of needed assistance later on today from an understanding friend.

10. 58F degrees and very nice running weather. I think I will run now, and maybe call some friends later on this morning. God is Good.

1. Now I remember why I always used to wake up happy — it was because I used to keep a cold cup of strong coffee at my bedside and chug it instantly upon awakening. I would immediately get into a good mood, and then immediately write down ten things I was grateful for. And then? I would go run five miles around a lake. No wonder I was always happy.

2. I also remember why I stopped doing this. It was because the doctors told me not to. The doctors told me to take some darned pill that’s supposed to help my thyroid a half hour before awakening, even though my thyroid had never bothered me. In that half hour, obviously I became unhappy, because I was denying myself my morning cup of coffee!! Thankful for the great revelation that it was the doctors who made me unhappy!

5. I might get a bicycle. Then I won’t rush from place to place so much when running late.  That said, the local image of this guy in suit and tie wearing a beanie jogging through red lights to get to work in the morning does have a bit of charm to it, no?

6. I see several emails from people I like — Tim, Jan, Holly, Danielle.

7. Just because I am the Artist doesn’t mean I am not fond of the Scientist. I have also noticed that the Scientist and the Artist often have one pleasant thing in common: the Philosopher. This might explain the voice that went through my head some months ago at Shari’s Restaurant: “Let the Philosopher prevail over the Artist.”

8. Sleep is such a healer. I’m glad I’m sleeping again.

9. Stats are suddenly skyrocketing on Eden in Babylon. I must be doing something right.

10. God is not anti-Art. He’s pro-Beauty. And I love Him. And He loves me. He probably even loves doctors, despite how much money they let themselves make and those stupid fancy cars they always brag about. I betcha Dr. Matt doesn’t drive a Ferrari. Besides, he’s the only doctor who’s ever done one thing for me that I know for sure is good. He removed my dystrophic toenail the right way, with the proper anesthetic. The anesthetic I used, I have not used for almost seven months.