Somebody sent me this little gem last night.  It’s the old English ballad “Dives and Lazarus,” based on the story of the rich man and the beggar in Luke 16.   The tune is incidentally often heard in 3/4 time as the hornpipe, “Star of the County Down,” and in some hymnals it becomes “Canticle of the Turning.”  The violinist is my multi-talented friend, the late Paul Anders, whom you may have seen on other instruments on this site.  I’m not sure when we did this one, but I recall it was a beautiful night.

Happy Independence Day, to whomever it may apply.   It applies to me in numerous ways, not the least of which is that I finished  a working script and score to my musical Eden in Babylon on Independence Day, exactly one year ago today.  And now, may I present you with a third version of my song “Rosy.”  This is from last Friday’s open mike.

Andy Pope on the Yamaha at the Open Mike
at the One World Cafe, Friday June 29, 2019.
“Rosy” from In Lies We Trust.
Copyright © 2019 by Andrew Michael Pope.  All Rights Reserved.

Before we go much further, I probably ought to let my close followers know how the radio show went.  It went great.  And not only that, but a couple of very interesting events occurred immediately before and after the interview.

Not having done a radio interview since 1987, I was extremely nervous.  I was so nervous, I had a hard time praying before the show.  I was grabbing a bite to eat at the Courtyard, when I prayed: “Lord, please let me run into another believer who will pray for me, because I cannot pray.” (Ironically, when I said, “I cannot pray,” I was praying.)

I believe that prayer was heard.   I had barely taken one step out the door of the Courtyard, when someone locking their bicycle said hi to me.  But I didn’t recognize her with helmet and haircut.  As she took off the helmet, I realized she was Amanda from my church.

So I explained the situation and asked her to pray.   Then I got to the studio right on time, and the entire event flowed beautifully.   It wasn’t perfect, of course.  But it was a lot better than I’d feared!

Immediately after the three hour event was over, I went to the bathroom and thanked the Lord.  Then I asked Him what I should do next.  (I’ve been doing that a lot lately, because I’m such a space case I often don’t know what the next logical thing to do is.)

The still small voice clearly said: “Relax and rejoice.”  I’d never heard that combination before.  But it sounded right to me.

As I left the studio, an incredible peace came over my entire being.  It was the most peace I had felt in my spirit since the day when I played the entire score on the piano of Dan Bukvich, the noted composer and percussionist.   His reply had been: “We gotta get this thing staged!”

After that, I was at peace for about six hours.  I’m not a person who ordinarily experiences that depth of peace.  (In case anyone hasn’t noticed, I’m one of those “high strung space cases.”)

This time, the peace was not quite so enduring.  But while I was immersed in a blissful peace, approximately five minutes after I had left the studio, I saw a fellow with a backpack, and I heard a familiar phrase.

“Hey, you dropped your smile!”

This expression was used a lot by panhandlers in Berkeley, during the years when I was homeless there.   Sometimes people were offended.  In this case, the young woman merely smiled.  You see, we have only one visible homeless person in this entire town.   So it’s very unusual to run into a homeless chap up here.

Smiling, I asked him: “Did you just say, ‘you dropped your smile?””

“Me neither.   I just got myself a small house on the edge of town, after being homeless in Seattle for years.”

After a brief but warm conversation, we parted ways.   I then reflected on how this sudden radio show had come about.   I had played a song at the Open Mike which we hold on the last Friday of each month in the quiet little Art-positive hamlet in which I dwell.   Then I found myself shooting the breeze with one of the other participants in the event, and it turned out he needed somebody for his radio show the following day.

The song that he heard, by the way, was this:

I received this unexpected video gift in my inbox yesterday.   A guy named Paul Anders is playing the cajon while I’m doing a song I wrote called I Am the Blues on a Yamaha electronic piano.  The beginning was chopped off, but I’m posting it anyway, since it’s the first thing I’ve posted musically other than solo piano since having miraculously been resurrected from the Grave of Homelessness after twelve years of turning over in it.

You can click on the song title above for the complete lyrics.  By the way, this is from last Friday’s Open Mike at the One World Cafe, and the person who videoed it was Brandy Sullivan, the co-owner of that venue.

I’ll post another solo piano piece, as usual, on Friday.   In the meantime, I hope you enjoy this “snippet.”  :)

So apparently somebody heard me playing at the Open Mike last Friday and posted this picture on his Facebook: 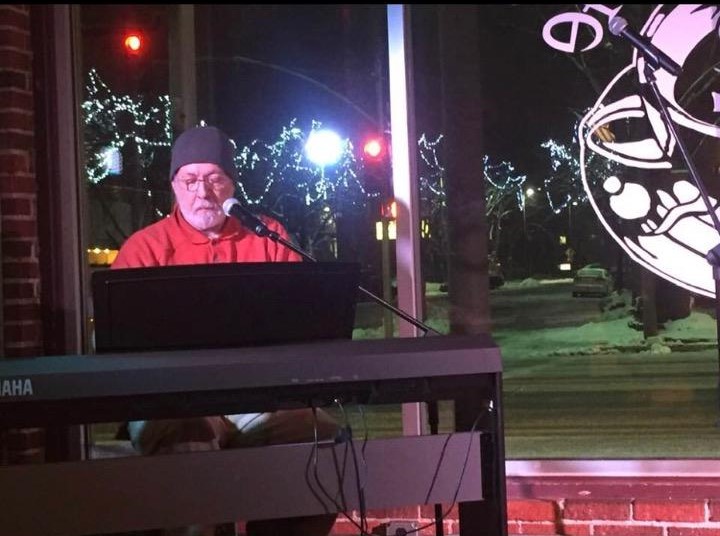 I don’t personally use Facebook, but I knew something was up as soon as I hit the downtown main strip this morning.  All these people who know me as a social activist were coming up and saying: “I didn’t know you were a musician!”

By the way, the song I played and sang was The Word from Beyond from my new musical, Eden in Babylon.  The link is to the lyrics, and if you want to hear an instrumental rendition of it on my SoundCloud, be my guest:

Otherwise, I must confess the obvious.  I mainly posted this here in lieu of a piano video because I once again didn’t get it together.  I didn’t get it together because it takes two people to produce those vids — one to play the piano, and one to make sure the recording device (i.e., the smartphone) is mounted in its proper place.  And each of the people who usually help me happen to be on extended holiday vacation.  :(

So, after much consternation, I have decided to postpone the piano posting till next Friday.  At that time, I hope to provide my unique rendition of “Wintertime Love” to whoever is available to receive it.  And may Jim Morrison be rolling over in his grave — with laughter.