I wanted to subtitle this one: “How NOT to forgive somebody.”   I got this crazy idea that  if somebody whom I have resented would only answer a few questions for me, I would finally “understand” the situation, and therefore finally “forgive” the guy.   After all, isn’t there a French proverb that reads: “To understand all is to forgive all?”   Sure there is!  Therefore,  if I could only understand this fellow’s baffling behavior toward me, then naturally I would finally arrive at a moment like this:

“Oh!  I get it!  That’s why you said all those weird and totally hurtful things!  I understand now!   It all makes sense!!  Finally, I forgive you, man!!!”

Believe me, this is not the way to approach the matter.   To illustrate this, I’ve prepared a fictitious email, sent to someone named “Tom” who hypothetically had offended me.  The nature of the offense is based on truth, though the names and variables have been altered and mixed, for the sake of discretion and taste.  Observe the absurdity of such an entreaty:

As you know, I’ve been having a very difficult time forgiving you for nearly two years now.    Largely, this is due to a single conversation in which you suddenly decided, among other things, that you were not really my good, close friend, but only a “casual acquaintance.”

Being as we have had many close conversations over a twenty year period of time, this demotion seemed a bit unfair.  Come to think of it, however, it was only I who kept revealing all kinds of personal information to you, thinking you were one of my very best friends.  Perhaps this explains why you would often take the information I conveyed to you in confidence and freely distribute among your many associates.  Had I been your friend, and not just some random guy, you might have been more loyal.

It appears that either you are one of the most malicious people I’ve ever met, or one of the stupidest.  I sure hope the latter is the case.  If you are stupid, then you simply don’t realize the implications of your statements, and therefore it is more difficult for me to find fault with you.

I have therefore provided you with a 12-point questionnaire, designed to determine whether or not you are an evil genius or a stupid idiot.  Once I know the answer, I will understand you perfectly; and therefore forgive you.

Do you see how ludicrous that would be?  If the situation were reversed, and I knew that someone hated me, and the person who hated me was insisting that I alter my behavior in some form or another, until he would no longer hate me, how would I feel?

I would be incensed!  It is not my purpose in life to adjust my behavior to please him who hates me.  That person who hates me is not God, and has no right to insist that I change in any way. 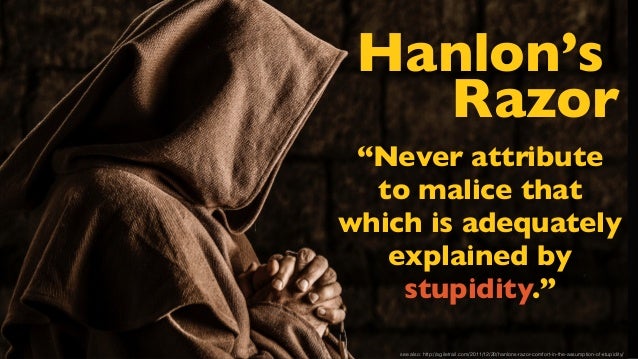 But the aphorism above comes to mind and is wise.  This person whom I am calling “Tom” also had a way of lecturing me.  Lengthy dissertations on how to live my life, flavored by little gifts he would buy me — running shoes, a cell phone, and lunches.  It took me a while to realize that he must not have been all that bright.   People who give a lot of advice generally mean well.  They’re just not smart enough to realize that they shouldn’t be doing it.

Of course, this begs the question: “Why on earth did I listen to all these uninvited lectures in the first place?

The answer is this:

When you’re homeless, and you’re out on the streets, and you’re not sleeping very well, and you’re being treated left and right as though you are a totally worthless scum bag with no clue how to live your life, you eventually begin to believe it.

So you turn to those who appear to be doing well, and you eat up their worthless advice as though it were manna from heaven.  Somehow, you don’t realize until you finally get inside that their advice pertains only to the world of the wealthy.  It has no relevance whatever to the world of the underprivileged — the world where you actually live.

As far as forgiveness is concerned, as Bryan Wagner has pointed out, it has nothing to do with the other person at all.   The idea of requesting that someone alter their behavior in order that you might forgive them is absurd.   Had they been willing to do something like that, you’d have never resented them in the first place.

So this is today’s post (obviously), after which the next post will be on Wednesday, and the one after that on Friday.  I say this so that you’ll know what to expect.

I would have posted earlier but one of my anxieties had not yet been addressed, and it would unfortunately have kept me from posting.  That anxiety is the father’s anxiety concerning the welfare of his daughter, from whom he hadn’t heard for an uneasy period of time.  She did answer the phone just now, she does seem fine, and all it took was a brief phone conversation for my paternal anxiety to be assuaged.

So – now I can post.  As to what I shall post, I can only say that the psychological issues regarding anxieties, resentments, mania, frustrations, confusions and so forth have been predominant in my consciousness of late.   I might be able to create a blog post when hassled by these things, but I certainly can’t create a good Act 2, Scene 2.  Somehow, I feel as though my psychic slate needs to be cleared before I can proceed.

Case in point.  After I “finished” Act 2, Scene 1 on Thursday, I emailed the script to a friend of mine whose opinion I esteem.  I then remembered that people tend to look at the beginning and the end of something before deciding if it’s worth their time and energy to bother with it.  The ending sucked, but I was exhausted by the effort, and my own perfectionism was a deterrent, so I slapped it in place pretty sloppily and decided to move on.  Then, when I realized that she would probably look at the ending before reading much of what came before it, I couldn’t live with myself.

So, on Saturday, I sat in the same spot for six hours rewriting the lyrics to “Children of the Universe.”  Now, even if you know nothing whatsoever about Music, if you choose to indulge me with four minutes of your time and listen to this clip, I’m sure you will easily discern how difficult the process of creating all those lyrics could be.  Click here:

Children of the Universe

I wrote that piece about four years ago, wrote about half the words, and left it – knowing that one day I was going to have to finish the lyrics.   Due to the arduous nature of the task, I procrastinated.  But did I “let go?”  Of course not.   If I had, I’d have never come back to it — even though it took four years to get around to it.   I thought about it consistently.  I had to do it — I just kept stalling.

This time, I was through stalling.  I hammered it out until I truly was satisfied.  Then I let go.   But here’s my quandary: why do I not let go before I finish an arduous task?   Why did I have to sit in one spot for six hours without taking a break before I could reach any peace of mind about it?

It seems to me, now that I really stop to think about it, that the difficulty I have “letting go” of a task is psychologically akin to the difficulty I have in “letting go” of broken friendships, shattered hopes, and so forth.   I have a couple friends who haven’t talked with me for years now.  One of them even hung up on the phone the last time I called him, and I honestly can tell you that I have no idea why.  However, since then, he has not answered any emails or phone messages.  Try as I might to find out what I could have done to have deserved such disrespectful treatment, I will never know the answer unless he decides to tell me himself.  That was four years ago, and not one word has been spoken.  Therefore, I must “let go.”